Cesc Gay’s film is an intimate, performance-driven take on a friendship nearing its inevitable end

The sense that Cesc Gay might make a significant mark on the offshore arthouse has been in the air for a long time, and Truman represents his best shot yet. In the years since his debut in 2000 with Krampack, Gay has quietly been establishing himself, via such titles as Fiction and A Gun in Each Hand, as a key chronicler of the insecurities of Spain’s Generation X as it anxiously grows older: and Truman, his inevitably melancholy record of four days in the shared lives of a dying man and his visiting friend, tackles the biggest insecurity of all for a generation which around about now is starting to become aware of its own mortality.

It’s Gay’s most emotionally direct work to date, thoroughly shedding the clever-cleverness of some of his earlier work, and also his most accessible -- a clean-lined, sensitively-written and beautifully played two-hander which tackles complex issues in a refreshingly straightforward, downbeat way.

Teacher Tomas (Javier Camara) leaves his Canadian home to fly to Madrid, where he’ll spend four days in the company of actor Julian (Ricardo Darin), about ten years his senior. (Both actors are repeating with Gay from the shorts which comprised Gun.) As his firce coughing from behind his closed door tells us, Julian has terminal cancer. Initially Julian is suspicious that Tomas is there to talk him out of his decision to halt his treatment, and there is tension, but this dissipates as he accompanies his friend around Madrid making his final preparations, seeking to settle his accounts before his departure.

Julian has decided to posthumously put his faithful, sad-eyed boxer, Truman, up for adoption and seems to care more about Truman’s fate than his own: he’s madly displacing his own emotions and fears onto his dog, hence the (completely misleading) title. Worriedly Julian and Tomas visit a vet (Alex Brendemuhl) to ask, in a typically tragi-comic scene, about how a bereaved dog might feel. Then it's off to the doctor (Pedro Casablanc), to reveal that Julian has decided to terminate his treatment.

The film shifts between face to face scenes involving the two leads and scenarios involving other characters placed in situations viewers may well have imagined themselves in. If you were dying, would you tell your friend Luis (Eduard Fernandez) you’d slept with his wife? How would that play out? If you suspected a friend of ignoring you because they felt too uncomfortable about your imminent death, would you challenge them about it? Thus Truman cannily plays into our collective imaginings.

For this character-based film, Cesc Gay has gathered an array of Spain’s finest character actors. They are the right vehicles for Truman’s sharp observation of people and their relationships: about say how a late-night conversation by cell phone can be more sincere than face-to face. There’s much black comedy, as in a conversation with a slick, faux-compassionate coffin salesman played by Javier Gutierrez, from Alberto Rodriguez’s multiple award-winning Marshland. (Who knew they made salt coffins, designed to dissolve in the sea?)

There’s bitterness too, when the the producer of Dangerous Liasons (magnificently rendered by vetJose Luis Gomez), in which Julian is still performing, has to fire him. And tenderness, particularly over the emotionally-charged final half hour, in a plotline involving Julian’s wife Gloria (Elvira Minguez) and son Nico (Oriol Pla): the closer the characters are to Julian, the greater the emotional intensity. Argentinian Dolores Fonzi does good work as Julian’s frustrated, protective sister Paula, but her role feels a little unfocused, especially given the dramatic clarity of the events unfolding around her in what’s essentially a bromance with a twist.

“Everyone dies in the way they know how”, muses Julian at one point, and Darin seems typically committed to proving that particular philosophical point. Recently very much in the spotlight withDamian Szifron’s Wild Tales, he is currently Argentina’s highest profile actor: though he’s been in bad films, he’s only ever delivered a good performance. Truman doesn’t alter that, with the script compelling the actor to explore the sufferings behind Julian’s bravado and self-protective black humor without ever explicitly giving them voice: as a performance, it’s an exercise in how to deliver subtle reaction shots, as Julian slowly comes to realize that there’s no tidy way of wrapping up a life.

It’s a buttoned-down performance in line with the film’s careful avoidance of sentimentality. It contrasts nicely with Camara’s, one of Spain’s leading character actors, more flamboyant, open style. The strongest scenes, in a film which is ultimately about friendship, are the ones featuring just the two of them.

Madrid watchers will enjoy identifying the bars and barrios where Julian and Tomas hang out, in what amounts to a small homage to a city which, given the subject matter, is often ironically brightly-lit by D.p. Andreu Rebes. In a film whose development depends more on increasingly heightening intensity than on unfolding events, Pablo Barbieri’s editorial judgement is spot on.

There’ll be much post-screening debate about the meaning of the titular pooch: the melancholy features of the aging Truman seems to shadow the film, and the lives of the characters in it, like death itself. Audiences will make their own minds up about all that: but it is indeed Truman, touchingly and appropriately, who gets the last word. 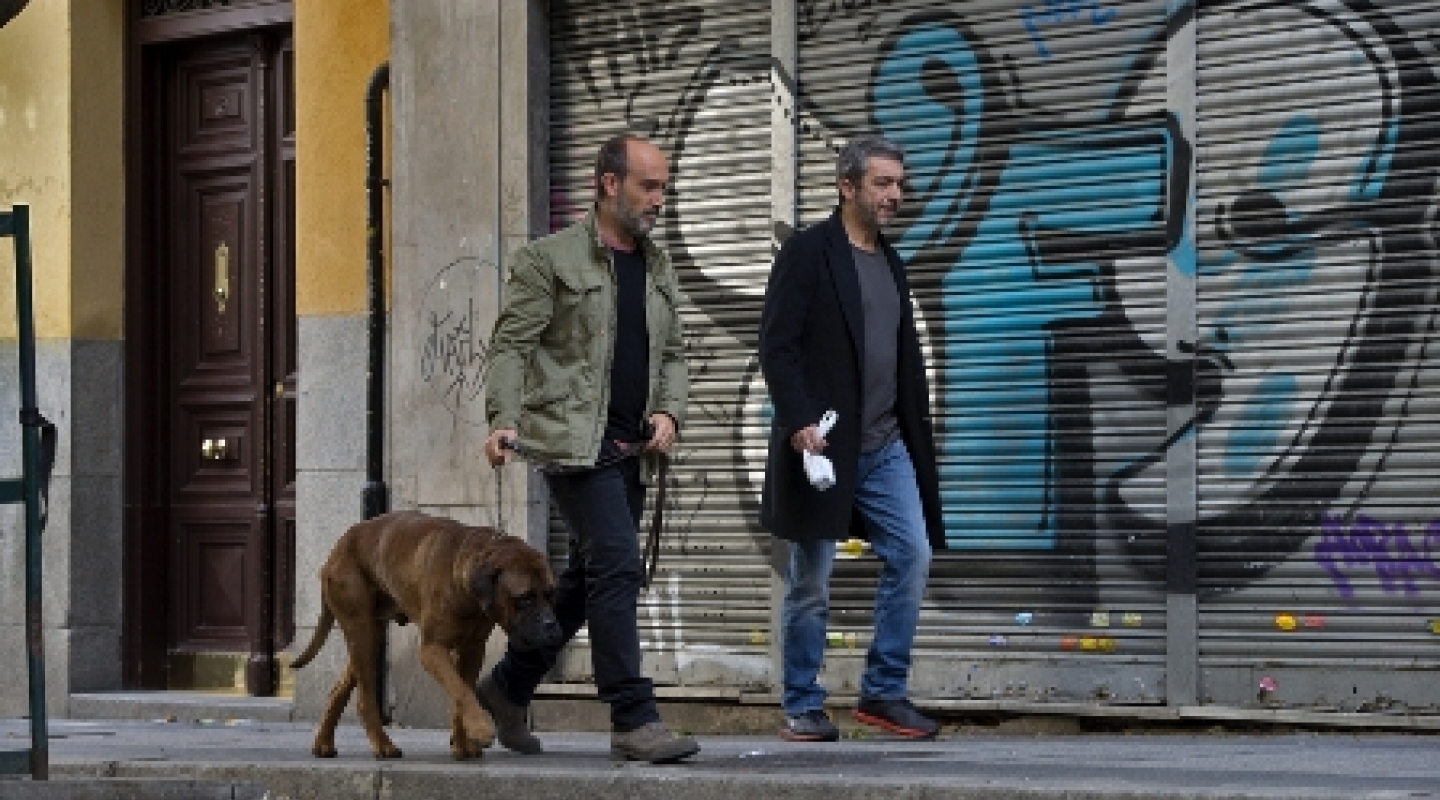